Refineries produce a broad range of products: diesel, gasoline, aircraft fuel, etc. The “residual” generated as a byproduct of the refining process is not used directly for combustion due largely to high viscosity. To generate value, the “residue” is often “cut” (mixed) with less viscous and much more costly petroleum products like diesel, and converted to a combustible Heavy Fuel Oil (HFO) (Refer to Figure 1 below). 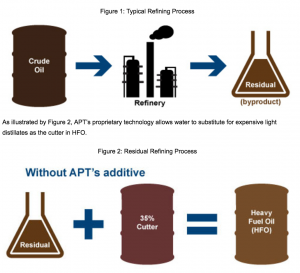 As illustrated by Figure 2, APT’s proprietary technology allows water to substitute for expensive light distillates as the cutter in HFO.

The ROE produced is a direct and economical substitute for HFO, while the “released” cutter can be sold directly to the market, thus generating substantial economic value. For many small oil producing countries without adequate refining facilities, production of ROE reduces or eliminates the needs to import cutter. Furthermore, unlike many competing products, ROE can be produced from a wide range of petroleum sources.

ROE incorporates a number of different refinery residues as the calorific feedstock and “cuts” these residues with water. The APT ROE technology allows water to replace expensive lighter distillates such as gas oil, light cycle oil, or diesel. The end product, which has a high water content of 30%-35%, can be a direct substitute for HFO. The utilization of this product as a heat source by a refiner will release the light distillates otherwise incorporated into HFO.

The APT ROE emulsification system is designed to utilize a number of different petroleum sources. The ROE technology includes a robust chemical package that can be tailored for particular combustion applications and different petroleum feedstocks. Proprietary ROE products can lower fuel costs for each application and also provide the ability to favorably influence the combustion process by controlling the particle size of the oil suspended in the emulsion.

The cost of the water, chemical additives and blending required to produce ROE can be significantly less expensive than the “cutter” that would otherwise be used. The resulting product is less viscous at ambient temperatures than most HFO products at 60º C. In cases where the cutter is also used to dilute the sulfur content of the residue, ROE can still be considered in conjunction with sulfur scrubbers.

Depending on the circumstances of a particular opportunity the potential fuels savings are significant. For example, using recent pricing from Singapore, the potential savings of using ROE compared to HFO could be as much as 15%.

Small particles (5 to 15 microns) of residue suspended in the water lead to improved combustion through secondary atomization. Other operational benefits of ROE in comparison to HFO can include, depending on the circumstances of the combustion application: